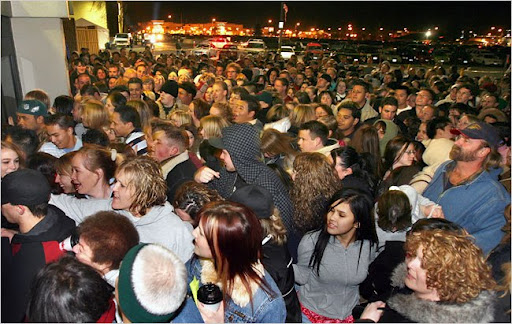 While this is not normally a news site, we’re happy to report that no one was trampled to death during yesterday’s “Black Friday” shopping excesses. Your intrepid TisBest reporters dutifully scoured the newspapers and online sites for pictures of boot prints on faces and blood-drenched T-shirts at Macy’s, but no, there were none to be found. Nobody’s life was squeezed out of them in the pursuit of this year’s ‘gotta-have-it’ electronic item, this month’s “can’t-live-without-it” plush toy, or the decade’s only “shoes-to-die-for.” Perhaps some dignity was lost, but gratefully, not a life.
There was, however, reported shoving, jostling, bumping and pushing at malls and shopping outlets around the country as people queued up to purchase the PERFECT GIFTS that recipients will enjoy for several minutes before pushing them to the bottom of their sock drawers or exiling them to that special storage place in the garage.
DOOT –DOOT – DOOT – DOOT – DOOT
Newsflash
Police say a Wal-mart store in California was closed for several hours before dawn after some Black Friday shoppers began fighting over bargain merchandise. Police herded customers into a parking lot until small groups were released for shopping.
Meanwhile, charities across the U.S. reported zero arrests due to assaults among charity gift card shoppers.