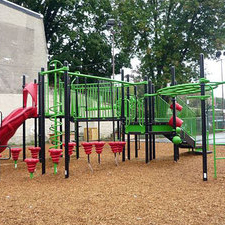 We were excited to hear a story about KaBOOM! on NPR’s Morning Edition in the car on the way to work this morning. KaBOOM does amazing work building playgrounds in under-served neighborhoods — and according to the interview, their volunteers built this entire playground in one day.

We’re always excited to hear when our charities get recognized.  But the coolest thing about KaBOOM! is their focus on fueling volunteerism.  One of their seasoned volunteers made a bet that at least one person from each build will remain an active volunteer: “It may not be building a playground, but they will have caught this volunteer spirit and go out and do other projects.”
I believe it. We’ve watched the non-material gift giving movement spread the same way. I’m willing to make the same wager that KaBOOM did: If you give a half-dozen Charity Gift Cards, one of those people you gave to will love the idea so much that they turn around and give them to others. The seed of giving is a powerful little concept, and that kind of organic growth is way more powerful than advertising.
Best,
Tegan